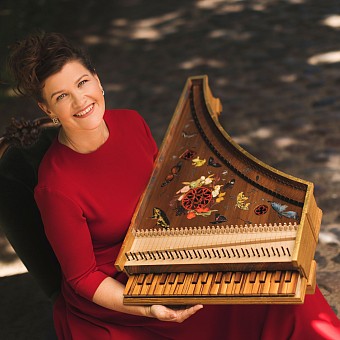 It seems that in recent years, the name of Ieva Saliete has nearly become synonymous with “harpsichord”. Thanks to her outstanding performance and original ideas, as well as her endless curiosity and the ability to captivate her audiences, the harpsichord has gained a new life in the Latvian concert scene. After studying in Riga and in the outstanding early music schools of Freiburg University of Music and the Basel Schola Cantorum, in 2010 the harpsichordist Ieva Saliete returned to Latvia. She continues to work with world-class musicians and tour far beyond the borders of her homeland, including solo concerts and work in chamber ensembles in Germany and Switzerland, as well as working in the Bernese early music orchestra Les Passions de l’Ame.
In her solo concert Avoti (Origins), that is set to take place on the 18th of June in the Riga Small Guild Hall, the Latvian Grand Music Award laureate will seek the beginning… Be it the first ever pieces written for keyboard instruments from the late 15th century collection Codex Faenze, or Bach’s Chaconne from Partita in D minor that still holds so much that is yet to discover, or examples of the splendid French and Belgian baroque that are not frequently heard in Latvia. Another source of inspiration for Saliete is the famous musician Wanda Landowska (1879-1959) - thanks to her, the harpsichord saw a true renaissance in the early 20th century, showing along with its historical image a completely new face, including features of avant-garde modernism. Saliete’s approach is similar - her study of the historical works is always balanced with an interest in everything new, not shying away from vibrant eclecticism and stark contrasts. Such is also Uģis Prauliņš’s new piece for harpsichord, and filled with musical quotes and references; the modern sonic world is also represented by the American minimalist Steve Reich’s legendary opus Electric Counterpoint, originally written for the guitarist Pat Metheny, and for an extra drop of intrigue - Edgars Cīrulis’ new composition for the rarely heard medieval instrument clavicymbalum..